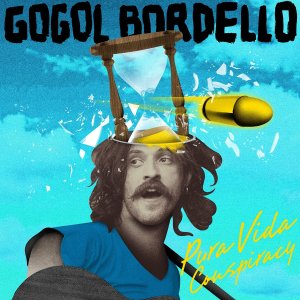 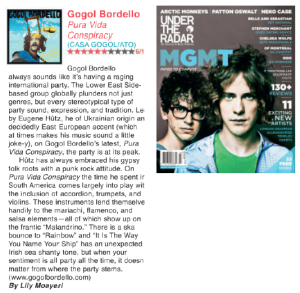 Reviewed for Under The Radar Magazine:

Gogol Bordello always sounds like it’s having a raging international party. The Lower East Side-based group globally plunders not just genres, but every stereotypical type of party sound, expression, and tradition. Led by Eugene Hutz, he of Ukrainian origin and decidedly East European accent (which at times makes his music sound a little joke-y), on Gogol Bordello’s latest, Pura Vida Conspiracy, the party is at its peak.

Hutz has always embraced his gypsy folk roots with a punk rock attitude. On Pura Vida Conspiracy, the time he spent in South America comes largely into play with the inclusion of accordion, trumpets, and violins. These instruments lend themselves handily to the mariachi, flamenco, and salsa elements—all of which show up on the frantic “Malandrino.” There is a ska bounce to “Rainbow” and “It Is The Way To Name Your Ship” has an unexpected Irish sea shanty tone, but when your sentiment is all party all the time, it doesn’t matter from where the party stems.

Go behind the scenes of the album’s creation via Rolling Stone.

This entry was posted on September 5, 2013 by Lily Moayeri in Reviews and tagged ato, gogol bordello, lily moayeri, pura vida conspiracy, under the radar magazine.

Error: Twitter did not respond. Please wait a few minutes and refresh this page.