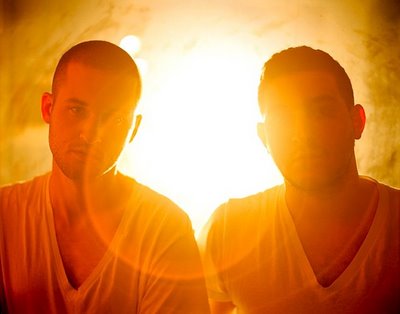 Alex Frankel and Nick Millhiser have voices that match the personas of their project, Holy Ghost!. The frontperson and the visual focus for the two, Frankel has a hurried, almost panting tone to his assured delivery, making all his opinions sound like statements. The retiring and studio-centric, Millhiser speaks quietly, halting between his words, making all his assertions sound like questions.

The New York City-based duo is the yin to the other’s yang. Friends since first grade, at that time they also started playing piano (Frankel) and drums (Millhiser). Sophomore year in high school, the two were part of a live hip hop group, Automato. By the time they hit their senior year, Automato had a major record contract. Produced by LCD Soundsystem’s James Murphy and Tim Goldsworthy, this relationship has lasted a lot longer than Automato, which was defunct soon after. Ensconced in Murphy’s and Goldsworthy’s DFA family, Frankel and Millhiser, now Holy Ghost!, made the rounds as session musicians on various albums. They became sought after remixers (Moby, MGMT, Cut Copy, N.E.R.D., Unkle), DJed, toured, released their seminal single, “Hold On,” followed that with an EP, and this year, their eponymous full-length.

Sounding like Phoenix’s precocious little brothers or MGMT’s mischievous second cousins, on its debut, Holy Ghost! blissfully pretends it is 1984. Lighthearted synth patterns trickle under “Wait and See” while “Static On The Wire” has melodies so happy you can hear a smile in the perfectly harmonized choruses.

“Part of the reason why [we] like dance music so much is there is a functional aspect to it as a genre: it has to make people dance,” whispers Millhiser. “When it is beat-based music, there are these restrictions you have to work in, which are really nice. We’re trying to find a balance between rigid and tough while maintaining the dynamics of a life performance.”

Holy Ghost! is not purely an homage to ‘80s new wave. A bit of that era’s Shannon-style R&B is heard on the album closer, “Some Children”—which incongruously, but magically features Michael McDonald.

Whether they were MTV-aged in the ‘80s or not, Frankel and Millhiser are card-carrying members of the yacht-rock set. McDonald’s voice was a staple in their homes and when it came to finding someone to carry the exceedingly high falsetto on “Some Children,” he was the daring choice.

“The chorus was too high for me,” says Frankel. “The only way I could do it was if I did it in a fake Michael McDonald voice. It sounded like I was doing an impression. We knew we needed to get someone else to sing it. [Murphy] forwarded the track to Michael McDonald. [Millhiser] was like, ‘You shouldn’t send it. He’s going to think we’re making fun of him.’ [McDonald] was like, ‘Love the song, totally know what part you want me to do.’ He sent it back a day later, unbelievable, his voice is just monster.”

For non-yacht-rockers, “Some Children” might be the best Michael McDonald song yet. Writing in a key too high for Frankel’s voice has opened the door for other collaborators such as the Rapture’s Luke Jenner (“It’s Not Over”) and Penguin Prison’s Chris Glover to step in.

“We have very similar tastes but very different skill sets,” says Millhiser. “Left to our own devices we each go too far in one direction. The worse case scenario is it’s a really great song and neither of us has anything to add to it. That’s when it’s nice to have somebody else come in. That happened a lot of on the record. That helped us produce it and helped us get through those blocks. But most of the time it works with just the two of us.”

Frankel concurs, “[Millhiser] and I don’t fight, which is nice—but we bicker like an old couple. When you’ve known someone as long as we’ve known each other, it can only escalate so far because you know we’re not calling it quits. In a band, it’s too many cooks in the kitchen. We’ve done that before and you spend half the time dealing with social anxieties and rituals instead of concentrating on the music. It’s much simpler with two dudes, there is much less emotion involved in decisions.”