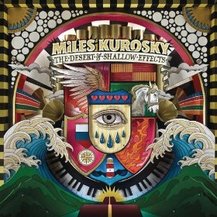 Miles Kurosky is the erstwhile front man for the defunct indie rock group, Beulah. Despite releasing four albums, the group’s demise six years ago went almost unnoticed—but not due to lack of decency. The split hasn’t had an adverse effect on Kurosky, however, as he has no other opinions but his own to consider on his debut solo effort, The Desert of Shallow Effects. If anything, Beulah might have been holding Kurosky back. He lets loose on “I Can’t Swim,” which is reminiscent of a younger era Blur and has a proliferation of instruments that seem to clash as much as fit together. In contrast, the psychedelic moodiness of “She Was My Dresden,” has touches of South—when that group was good enough to be a reference point. “The World Won’t Last the Night” turns yet another corner with orchestration that takes it into prog-rock territory. Throughout the album, Kurosky sounds clear and sure of himself. Having experienced major health issues for the last few years, the self-awareness from the experience is reflected in Kurosky’s honest lyrics, making them ring truer than ever before.