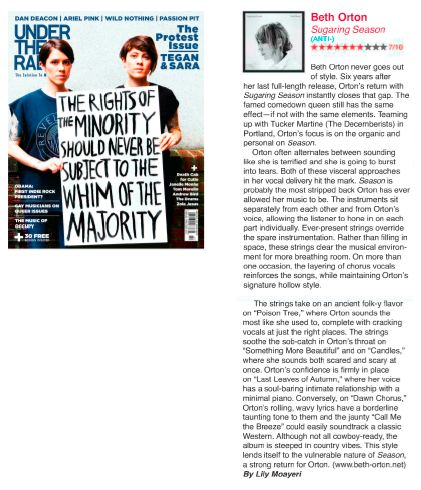 Reviewed for Under The Radar Magazine:

Beth Orton never goes out of style. Six years since her last full-length release, Orton’s return with Sugaring Season instantly closes that gap. The famed comedown queen still has the same effect—if not with the same elements. Teaming up with Tucker Martine (The Decemberists) in Portland, Orton’s focus is on the organic and personal on Season.

Orton alternates between sounding like she is terrified and she is going to burst into tears. Both of these visceral approaches in her vocal delivery hit the mark. Season is probably the most stripped back Orton has ever allowed her music to be. The instruments sit separately from each other, and from Orton’s voice, allowing the listener to hone in on each part individually. Ever-present strings override the spare instrumentation. Rather than filling in space, these strings clear the musical environment for more breathing room. On more than one occasion, the layering of chorus vocals reinforces the songs, while maintaining Orton’s signature hollow style.

The strings take on an ancient folk-y flavor on “Poison Tree” where Orton sounds the most like she used to, complete with cracking vocals at just the right places. The strings soothe the sob-catch in Orton’s throat on “Something More Beautiful” and on “Candles” where she sounds both scared and scary at once. Orton’s confidence is firmly in place on “Last Leaves Of Autumn” where her voice has a soul-baring intimate relationship with a minimal piano. Conversely, on “Dawn Chorus” Orton’s rolling, wavy lyrics have a borderline taunting tone to them and the jaunty “Call Me The Breeze” could easily soundtrack a classic Western. Although not all cowboy-ready, the album is steeped in country vibes. This style lends itself to the vulnerable nature of Season, a strong return for Orton.

Watch the video for “Something More Beautiful.”

This entry was posted on November 15, 2012 by Lily Moayeri in Reviews and tagged anti, beth orton, lily moayeri, reviews, sugaring season, under the radar magazine.